Well, it's been weeks since I said I was going to post about this, but here is my method for making chicken broth - both meat broth and bone broth.  This is something that helps with many meals, as it provides a lot of broth saved up to use for many soups, stews, and other things.  It also provides much meat to use in soups or even on its own in chicken salad or with a sauce on top.  It is also not very time consuming - it can seem like it at first because it is such a long process.  But the hands-on time is actually fairly little compared to how much nourishing food you get from it!  This process is one way we make eating GAPS and very nourishing very do-able for us.

I can't tell you how much to do at a time or how often to do this, because that will depend on how often you use broth and meat in your eating lifestyle.  We probably do this every 2 weeks, on average.  If you are in early stages of GAPS, you will do this fairly often.  However, doing as large of a batch as possible at once is so helpful!  Also, we have considered getting another giant (or giant-er!) stock pot and just doing 2 pots at the same time!  So, here's my method...

Part 1 - Meat and Meat Broth!
1.  Place (usually still frozen because I forget to take them out the day before...) whole chickens, hindquarters, and any other pieces I may have in large stock pot.  I often add heads/necks and feet.  Never thought I'd be one of those people, but here I am...I also add any vegetable scraps/pieces I want to use - carrot, onion, and celery ends and pieces leftover from other meals and juicing.  Often, I do not even have vegetables in there - and the broths still turn out wonderful.

2.  Cover with filtered water.  I bring it to a boil (usually slowly, over low-medium heat (3-4 on my 8 scale burner)) and then reduce heat and simmer.  Simmer 3-4 hours, gently - try not to let it get to the heavy fast boiling stage!  I find it is best to cook the meat gently. 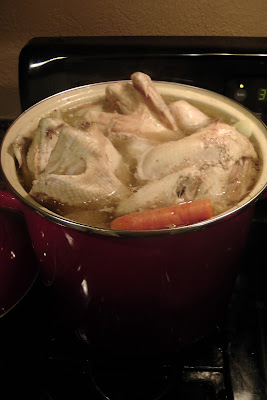 3.  After the chicken has simmered a few hours and it is all falling apart (use tongs to grab a piece and see if it falls apart from the rest of the chicken), remove all chicken from the pot onto a large platter or plate or into a large dish or bowl.  Once it is cool enough to handle, take all the meat off the bones ( I find it much easier to use my hands rather than try and separate it with tongs and a fork/knife when it's too hot to handle).  I keep 2 dishes with me - one to hold all my meat, and one to hold everything else - skin, bones, cartilage, all that fun stuff.  (Meat at top, everything else at bottom)

**GAPS Note: In this stage, you could also keep all soft parts (skin, cartilage) separate as well to blend up for your 'pate' to add to soups or sauces! 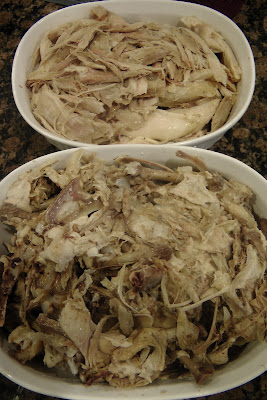 Make sure you save all that bone/skin stuff for the next part - making your bone broth!!  Use the meat for soups and any other meals!  I often use it for a couple of pots of soup that week and freeze the remainder in 1 or 2 cup portions for more meals the next week.  If you are in early stages of GAPS, you will probably just use all of it in 1 week, depending on how many people are in your home and how many are doing GAPS.
4.  Then, simply put your remaining meat broth into jars for your soups!  (Sorry I don't have a picture of this.)  Simply strain it if needed and put in jars or bowls or glass containers, or put it directly into a pot to make some soup!  (I use pretty much the same process as straining for my bone broth below in #8, but it's not as much work because you have removed all meat/bones/skin from the pot.) 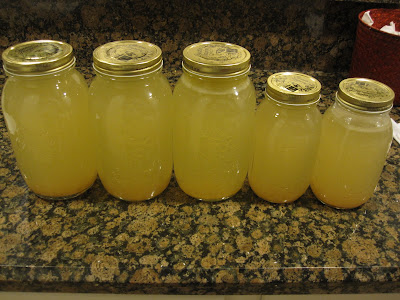 Part 2 - Bone Broth!(You could start this process right away after finishing the meat broth.  I usually start it the next day or freeze all the carcasses and do the bone broth the next week when I am in need of it.)

5.  Put all your carcasses that you have from your meat broth process, along with any carcass you have saved from roasted chickens and the like, into your stock pot again, cover with cold filtered water, add a splash (with my giant pot, I usually add about 1/4 cup - with a crock pot or smaller pot, and therefore less carcass, I use about 2 Tbsp) of raw apple cider vinegar.  Let this sit for 1 hour to draw the minerals out of the bones.

6.  Add any vegetables/scraps you would like (again, I often do this without any veggies...when I do, I just use frozen scraps of carrots, onion, and celery) and then bring it to a boil. 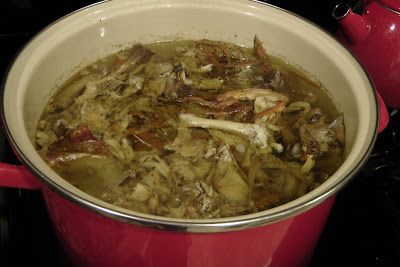 I have done both of the following:
-at the end of the first day, let it cool for a couple of hours and then stick the giant pot in my fridge and put my fridge on power cool, remove it the next morning and simmer it all day OR
-leave it simmering until I am about to go to bed, remove from stove onto a trivet or thick towel, wrap in a giant towel, and leave it there overnight - set it back on the stove to simmer first thing when I get up in the morning.  Never have had a problem either way.  :-)  It really stays very very warm wrapped up overnight on the counter.

**Tip!: While it is cooking, go ahead and make a couple of soups!!  Just remove broth you need and add water to fill the pot back up!  It stretches your broth further, and allows you to easily make a couple of meals! 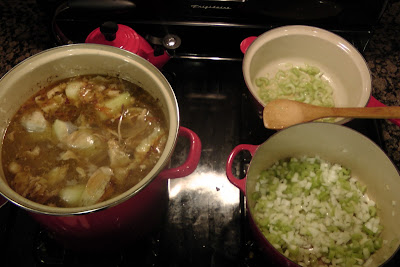 8.  Fun part - processing the broth.  Here I share the BEST way I have found to do this part!  This is what works for me!

Get your pot, the most giant bowl you have, a large strainer, a measuring cup (I use either my 2 cup or 4 cup), and your jars or containers you are going to store your broth in.  I do freeze broth in ziploc bags, but I always wait until it is chilled in the fridge - I would never put hot or even warm broth into plastic because of leaching chemicals. 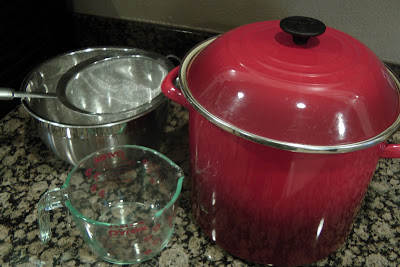 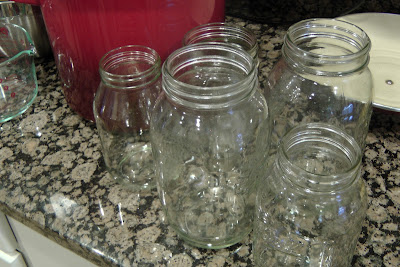 This part takes some muscle :-).  Take your giant pot and pour your broth into the large bowl through the strainer.  Be careful of all the carcass just falling out and splashing and spilling everywhere!  You have to pour fast enough to not dribble broth everywhere but not so fast that you splash broth and stuff everywhere :-).  Ask me how I know... 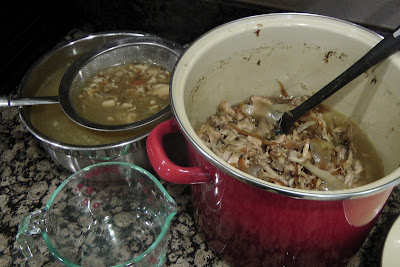 Take your strainer out of your big bowl. 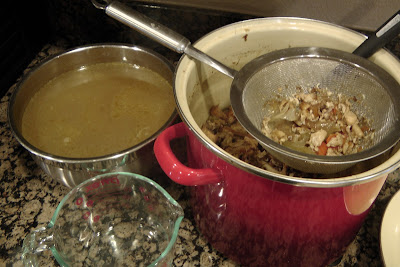 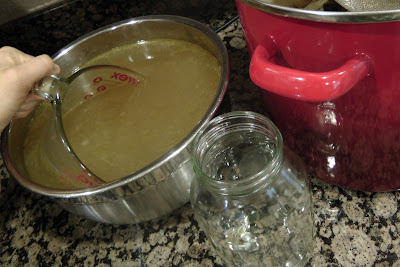 and pour. (like you really needed pictures of every little step...but oh well, it's fun to try and take pictures and pour broth at the same time!) 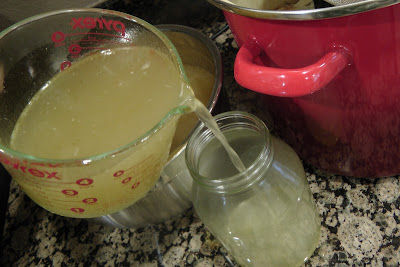 Look how nicely the measuring cup just sits in the bowl with the handle hooked over the edge!  So convenient, those handles!  :-) 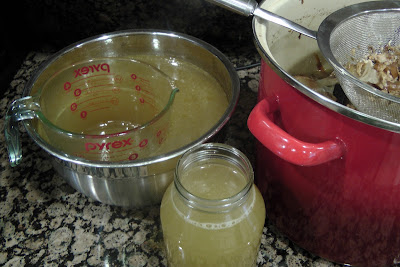 Do this until all your broth is all jarred up!!  Note: when it gets to where there are lots of bones/etc in the pot and only a little broth, you might want to scoop all that out before trying to drain the rest of the broth out or all that stuff may just fall out of the pot and make a big ol' mess.  :-o 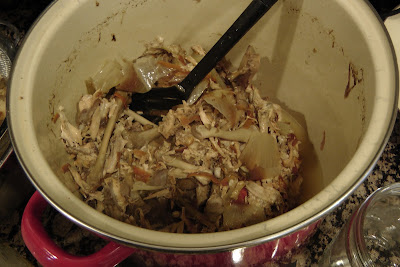 9.  Here's an optional step: (GAPS Step!) take the large leg and thigh bones and break them open or cut them lengthwise with a knife.  Scoop/scrape out the marrow - either eat it plain, on something, or put it into your broth!  Marrow is incredibly nutritious and healing!  Because your bones have cooked so long, cutting them will be easy peasy! 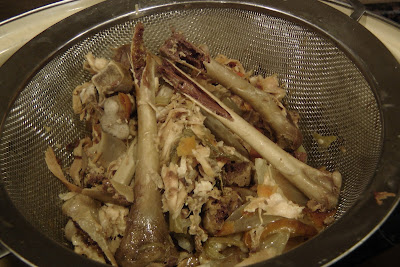 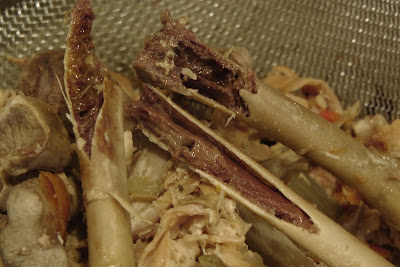 10.  Well, this isn't really a step, but I like having nice round numbers and 10 sounds good, doesn't it?!  There's all your bone broth, all ready to store and use!  Beautiful, isn't it?!  Note: I don't salt my broth until I use it.  And I always use Celtic or Himalayan Salt to taste.  Amazing.  Mmmm....I want some soup... 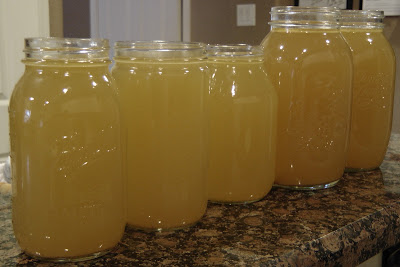 And there you have it!  My method and process for making huge batches of both meat and bone broth.  It is wonderful and beneficial to have both types of broth in your diet, whether you are on a healing diet like GAPS or just want to eat in a nourishing way.

Also, it's wonderful to have broth on hand for anyone who gets sick in any way - cold, flu, stomach bugs...all helped immensely by broth!

AND it's a FANTASTIC early or first food for babies.  They love it!

This is a great way to take a step forward in eating more nourishing, healing, and health promoting foods.  Make lots of broth and use it!  Making beef broth is very similar, and I will share that someday as well!

This post is part of Real Food Wendesday at Kelly the Kitchen Kop and Frugal Days, Sustainable Ways at Frugally Sustainable!
Posted by the herzogs at 7:29 AM

What I Blog About